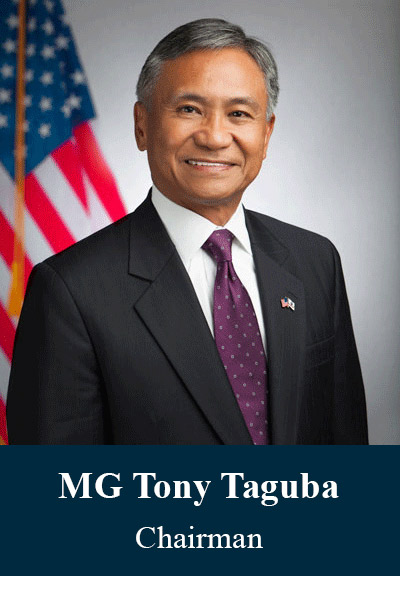 He is President, TDLS Consulting LLC, which provides business consulting services to small companies – disabled veteran owned and economically disadvantaged. He is the Chairman, Pan Pacific American Leaders and Mentors (PPALM), a national, all volunteer, nonprofit, 501(c)3 tax exempt organization committed to mentoring and professional development of military and civilian leaders. He served as Vice President for Army Account, SERCO Inc., a leading global services company from July 2007 to Nov 2008. As a community service advocate, he provides assistance to Veterans with their benefits issues, help raise funds for college scholarships, and as a volunteer to the United Services Organization (USO).

Born in Manila, Philippines on October 31, 1950, MG Taguba was commissioned as an Armor officer following his graduation from Idaho State University in 1972. He served in numerous command and staff positions from platoon to General Officer level. His service tours included assignments in the United States, South Korea, Germany, and Kuwait forward deployed in support of Operation Iraqi Freedom and Operation Enduring Freedom.

Selected for Brigadier General in 1997, he served as Chief of Staff, US Army Reserve Command, as Assistant Division Commander, 24th Infantry Division (Mechanized), and as Commanding General, US Army Community and Family Support Command. Major General Taguba was then assigned as Vice Director, later as Acting Director of the Army Staff, Pentagon—responsible for directing and coordinating the staff actions of the Army’s Executive Offices and Senior Staff directorates within Department of the Army, Department of Defense, Congress, and Interagency elements.​

During Operation Iraqi Freedom, he was assigned as Deputy Commanding General for Support, Coalition Forces Land Component Command (CFLCC)/ARCENT/Third US Army, forward deployed to Kuwait. He was responsible for overseeing the logistical and support services to US and Coalition Forces totaling over 150,000 troops conducting combat operations in Kuwait, Iraq, and Afghanistan. His duty included coordination of host nation support from the Government of Kuwait, and security cooperation and training requirements with Saudi Arabia, Jordan, Egypt, and Qatar.

He received an Honorary Degree of Doctor of Humane Letters from the University of San Francisco on May 17, 2008. He was appointed a Senior Fellow to New Westminster College, British Columbia, Canada on June 21, 2013.

He is married to Debra Ann Taguba. They are proud parents of two adult children, Lindsay, the Central Services Director of Newspring Church in South Carolina, and Sean, a US Army Captain who has deployed to Iraq and Afghanistan. Ms. Marie C. Blanco worked for the late U.S. Senator Daniel K. Inouye for 34 years, during which time she addressed many of Hawaii’s unique needs, problems, and challenges. One of her major duties was to ensure that any measure debated in the U.S. Senate did not adversely impact the state of Hawaii. Her legislative issue areas included agriculture, banking, budget, business, energy, finance, insurance, and taxes. Among the many initiatives Ms. Blanco managed and seen to completion were the University of Hawaii’s

Small Business Development Center Program, the breakwater repairs for the Kaumalapau Harbor in Lanai, Hawaii, the creation of the Imiloa Astronomy Center of Hawaii, and the U.S. Pacific Basin Agriculture Research Center, in Hilo, Hawaii.

Ms. Blanco is a strong advocate for the Filipino veterans of World War II. She successfully and tirelessly worked on legislative measures that recognized the sacrifice, service, and contributions made by these veterans in defense of our nation. Two most notable measures that became public law granted naturalization to approximately 25,000 Filipino World War II veterans, and provided a one-time benefit payment to over 18,000 Filipino World War II veterans.

In January 2005, Ms. Blanco was promoted from Legislative Assistant to Deputy Chief of Staff and Legislative Director, and in October 2011, she was named Chief of Staff for Senator Inouye’s Washington, D.C. office. Ms. Blanco holds a Bachelor of Science Degree in Business Administration from the University of San Francisco in San Francisco, California, and a Master’s Degree in Public Administration from the American University in Washington, D.C. In May 2013, she formed MCB Consulting, LLC, a government relations consulting company based in Falls Church, Virginia. A son of a Filipino World War II veteran, Jon Melegrito is a founding member and former executive director of the National Federation of Filipino American Associations (NaFFAA). Melegrito was co-chair of the National Alliance for Filipino Veterans Equity (NAFVE) and has served in various advisory boards, including the Philippine American Foundation for Charities (PAFC), Asian Pacific American Labor Alliance (APALA), the Justice & Compassion Task Force of the United Methodist Church, Tanghalang Pilipino ng DC (a cultural arts group), the Asian American working group of the US Bureau of Census and the GWU Philippine Cultural Society. A journalist by profession, Melegrito received his Masters of Arts degree in Communications and Public Affairs from American University. He retired in 2012 from the American Federation of State, County & Municipal Employees (AFSCME), where he worked as a publications specialist in the Communications Department. Prior to AFSCME, he was a supervisor at the George Washington University Library. He currently writes for the Philippine Inquirer (Inquirer.net), Positively Filipino, Pinoy Newsmagazine, and Manila Mail.